Menu
Home > Articles > Pro Chef: Vegan – How Big Can It Get?

Pro Chef: Vegan – How Big Can It Get?

There are many ways to embrace vegan living. Yet one thing all vegans have in common is a plant-based diet avoiding all animal foods such as meat (including fish, shellfish and insects), dairy, eggs and honey

Although the vegan diet was defined early on by the The Vegan Society’s beginnings in 1944, it was as late as 1949 before Leslie J Cross pointed out that the society lacked a definition of veganism. He suggested “[t]he principle of the emancipation of animals from exploitation by man”. This is later clarified as “to seek an end to the use of animals by man for food, commodities, work, hunting, vivisection, and by all other uses involving exploitation of animal life by man”.

As we look today at many different restaurants in the casual dining to fine dining sector, takeaway, fast food outlets and any outlet that’s serves us food they have embraced the need and love for vegan and vegetarian foods, the customer base is growing, The number of vegans in Great Britain quadrupled between 2014 and 2018. There were 600,000 vegans in Great Britain in 2018, or 1.16% of the population; 276,000 (0.46%) in 2016; and 150,000 (0.25%) in 2014, The poll results suggest that over the next year, 2.2. million people will adopt veganism, increasing the vegan population to around 2.9 million.

Menus have changed, we no longer think as vegan food as an afterthought or ‘just do up a little menu’, dishes are now a major part of a menu, and dishes that are on a menu whether plant based or not should only be there because it tastes great, they need to earn that place, not because we need an option, food needs to taste great, full of flavour.

To sum up, we should aim to sell dishes because they taste great, it just happens some are plant based and are included for all to enjoy, food moves fast in development, the high streets and supermarkets have to be quick to the party, let’s not get left behind in creating great food for our customers, we are only at the beginning of the plant based party.

Note that serving suggestions and recipe images may not represent the actual dish.

The salad
In a large bowl, stir together the cauliflower, carrot, red pepper, Red onion, beansprouts, chili and coriander.

The dressing
In a small bowl, whisk together the olive oil, lime juice, ginger, and pepper.

Toss with the dressing. Serve.

5 Delicious Recipes to Make for Veganuary 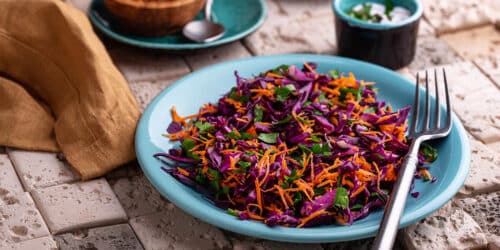 Is your Restaurant Ready for Veganuary?